These screens are not only on roads, but you will have seen them installed in buildings or big houses.

I think that you know the objective of these screens, but you didn’t pay attention to these one. Perhaps, you need one of these panels or some people that you know. In fact, these panels are for these people who are tired of noise and annoying sounds. Ambulance sounds, animal sounds, industrial noise or one of the most annoying, noise at night that won’t let you rest.

Noise pollution has increased in recent years. According to the Organization for Economic Cooperation and Development (OECD), 130 million inhabitants of the OECD countries detect sound levels above 65 decibels, which is the limit accepted by this organization. 300 million inhabitants are living in the “area of hearing discomfort” between 55-65 dB. Noise is becoming one of the biggest sources of discomfort for people.

Sound is any phenomenon that involves the propagation of elastic waves (audible or not) which produce a vibratory movement towards a receiving body.

When we refer to noise, we refer to an unwanted sound which can become pollution if noise contributes to people’s discomfort on an ongoing basis.

Noise is measured in decibels (dB) and is a logarithmic, dimensional, and mathematically scalar unit. As we said, people find a noise ratio of 55-65 dB annoying. Let’s look at a small graph to see noise levels of different sources. 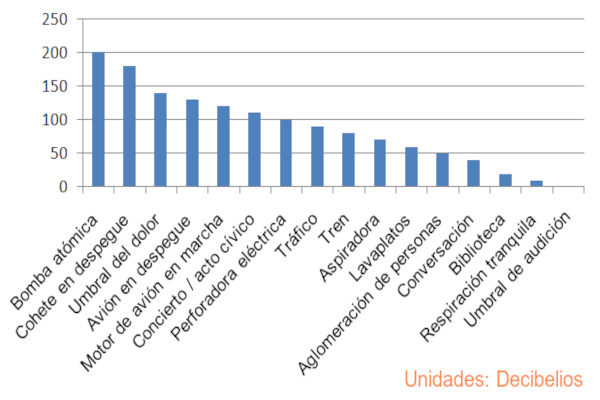 Loud noise levels can cause harmful health effects. That’s why World Health Organization (WHO) sets different noise levels that are annoying depending on the time of day. The different moments of day are divided into day, night and early morning and each has a noise threshold which exceeds that threshold can be annoying for most people.

We bring together population results exposed to worrying noise levels in Spain according to the Acoustic Pollution Information System (APIS). MITECO ministry has this system to provide data on noise pollution in Spain. The following graphs show the number of inhabitants of different Spanish CCAAs exposed to noise levels considered annoying such as between 55 -60dB and 60 – 65dB. These noise levels are not only from the crowds produced in the different populations of the CCAA, but also from road, rail and air traffic in that CCAA. 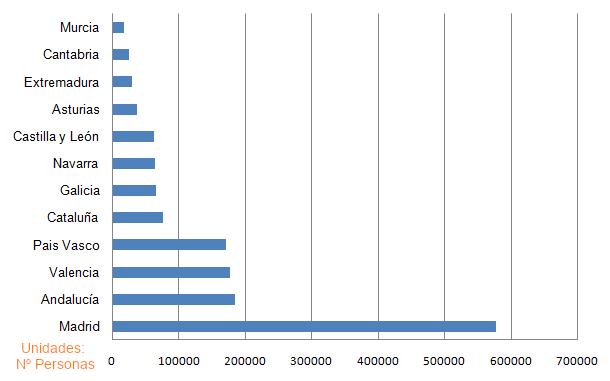 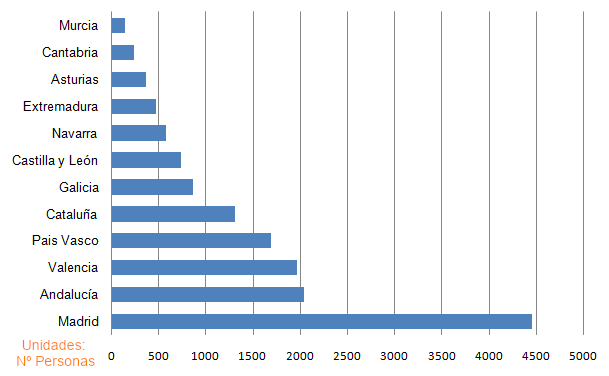 These graphs show that noise levels considered being annoying or worrying reach a high number of Spaniards.

What is the function of acoustic panels in road and rail traffic areas?

Acoustic panels can be placed in both urban and intercity areas. Surely where you have seen them most have been on roads that pass near urbanizations or chalets whose noise of traffic negatively affects the well-being of people in those areas. Using this image you can check the trajectory of the noise coming from the road to the buildings.

As we see the propagation of noise is direct to the buildings, which can cause discomfort if the traffic is transited. Therefore, acoustic displays have the main function of absorbing or bouncing off road noise and thus significantly reducing noise levels that spread to urban or intercity areas. The following image shows the noise deviation from the road making acoustic displays the best choice for reducing noise levels that may be annoying. 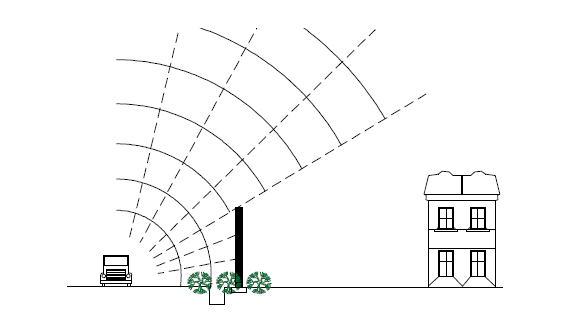 Depending on the acoustic display model, noise can be absorbed, isolated, or double absorption and insulation function. To properly choose the model, acoustic measurements regulated under different regulations are used. In addition, the displays must comply with a number of fundamental mechanical parameters so that they can withstand environmental loads that could cause the deterioration or destruction of them.

What properties do screens have?

When creating an acoustic display it should be noted that it can either absorb noise or it can bounce noise from the noise zone. The noise zone is the area that spreads excess noise to the outside. Agglomerations, roads, railways, aircraft, leisure areas, etc. can be called a noise zone. The effectiveness of the display will depend on the adequacy of the selected model, as well as its correct design in terms of location, extent, height, etc. it refers.

When placing the screens, the orientation of their two faces must be taken into account, since each one performs different acoustic soundproofing tasks. The face of the screen that is oriented to the noise zone is the absorbent face. Its degree of absorption can be measured from the weakest (A1) to the strongest (A5). On the other hand, the face oriented to the area that you want to protect from noise is the insulation face or reflective face. Its degree of isolation can be measured from the weakest (B1) to the strongest (B5).

On the other hand, the mechanical properties that, as discussed, determines resistance to atmospheric agents or accidents that may occur near them should also be assessed.

Insametal manufactures and installs the following types of acoustic displays according to the material with which they are manufactured:

Normally, it is the engineering that writes the project or the client who designs the screen and decides the optimal type of screen based on the acoustic and mechanical properties, and the area to be protected.

We hope to have resolved your doubts and questions about noise pollution and our proposal to resolve excess noise through acoustic displays. Do you want more information? Do not hesitate to contact us.

You can find out more about which cookies we are using or switch them off in settings.

This website uses cookies so that we can provide you with the best user experience possible. Cookie information is stored in your browser and performs functions such as recognising you when you return to our website and helping our team to understand which sections of the website you find most interesting and useful.

Strictly Necessary Cookie should be enabled at all times so that we can save your preferences for cookie settings.

If you disable this cookie, we will not be able to save your preferences. This means that every time you visit this website you will need to enable or disable cookies again.

This website uses Google Analytics to collect anonymous information such as the number of visitors to the site, and the most popular pages.

Please enable Strictly Necessary Cookies first so that we can save your preferences!